OK, peeps. Thank goodness y’all are into this contest (I’ve gotten such wonderful mail since the first story went live)… for those of you waiting with baited breath, here’s installment #2. Andria Davis is an adventure girl based in beautiful North Carolina, where she resides and co-owns Brushy Mountain Publishing with Leland (see below) and Hudson (see here). For more information about Andria, visit her blog at http://www.rivergypsies.com/. It’s a good thing I’m not judging in my sole discretion, since these folks have a pretty sweet van, and I’m completely unbiased when it comes to people with pretty sweet vans… 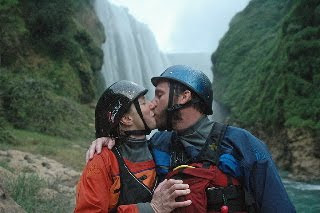 Finding Love Down By the River

I had just moved to Asheville, NC and was just cutting my class V kayaking teeth. Being new to the area, I went out to bars quite often. I was out one night and noticed this guy wearing a cap with a boating company logo on it. I went over to him and asked him his number, never thinking anything that he would think I was coming on to him–he was way too young for me! A couple of weeks later, it was raining, so the creeks were filling up, and I began calling people to look for a group who would guide me down a creek. I called this guy, Jeb and he was so elated–I had no idea, but he was interested in me–something that I didn’t find out until months later. He and his roommate, Leland, and some other guys agreed to meet me at a good beginner class V creek and go boating.

We had a great day that day. I was boating with the boys, never thinking a thing about romance–I was just one of the boys for once, right? We all agreed to go kayaking together again the next day and went to a river that turned out to have way too high water. That meant that it was dangerous and we had to do some rock climbing in order to portage one of the rapids. On the next rapid after the portage, I flipped over and my paddle got stuck in some rocks, which had such a force that it subluxed my shoulder. I swam from my kayak and got to shore. Leland helped me get my boat and paddle back from the river and I said that my shoulder was hurt and I needed to hike out. We were maybe 500-700 feet down in a steep river gorge, and Leland said there was no way I could hike out alone and that he knew the way and would help me out of there. The rest of the party continued downstream and Leland and I began our epic hike/climb out of the gorge on a cold January afternoon. We climbed out of there with our kayaks, sometimes needing ropes, and we were having a great time! We were helping each other climb, joking, laughing, and just getting along really well. I remember thinking, “I could travel and do some kayaking with this guy–we are getting along well in a stressful situation.” He wasn’t dominating and bossy–we worked together as a team and I felt respected. We had to leave our kayaks in there to come back for the next day in order to speed up the process of getting out of the gorge that night. We made it back to the car about the same time as the other guys and we all celebrated with some tequila shots. Its felt so good to be alive! We all went out to eat and I continued to get along with Jeb’s roommate exeptionally well. So, the next day we had to meet up and go retrieve our kayaks out of the gorge. It was an all day affair of clammering around in a river gorge trying to remember where we left our kayaks, then retrieving them and hiking them several more miles back to our vehicle. Again, we had a great time together and I felt like I had a new best friend. He felt the same, and he was in love, but I just wanted a friend–I had had enough with guys at the time and wasn’t looking for romance. When I told him this, he was devastated. The whole situation was complicated by the fact that the original guy that I called, Jeb, also wanted to date me, but I wasn’t interested in him either, and that I was dating some other guy casually. Ahhh! All way too complicated! Leland told me he couldn’t just be my friend and handed me a CD mix that he made me. I parted ways with that group of guys and began to also break it off with the guy I had been dating –I needed a break!

Months went by, and I listened to this CD that Leland had given me–the songs in it spoke to my soul. This guy had alot of class and soul! I would listen and cry. Eventually, I had to make contact with him. Being the crazy adventurous types that we are, we then planned to go backpacking in the Grand Canyon together–as friends of course. Well, we went, and this time, I fell in love. I knew I loved him, but was not ready to tell him that. But he told me–in a drunken stupor on the rim of the Grand Canyon–we evoked Edward Abbey and Leland professed his love to me.

When we returned home, he left for a long kayaking summer road trip, and I went to my summer job as a raft guide. He gave me another CD that continuously ripped my heart out. I decided that if I missed him, he was the one and if I didn’t care that he was gone, then he wasn’t the one. That summer, raft guide boys were just not interesting–all I wanted was Leland. And he felt the same–he came home early from his road trip and said, “Pack up–lets go kayaking together in BC.” I quit my job and moved into his truck.

When we returned home, I did one more stint living at a raft outpost away from him. Then at the end of that season–Gauley season, I moved into his winter home–a camper in his sister’s yard.

Since then, we have migrated around, holding various odd jobs. We have been through some crazy hard times traveling around the continent living in trucks, and vans, and going kayaking. Eventually, we bought a house in Asheville, NC and we started a business together publishing guidebooks and yoga DVDs. We also bought a brand new camper van that we travel in alot of the year still. 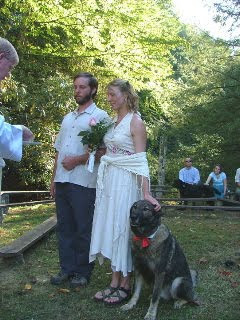 In 2006, Leland proposed to me in what some would call an odd place–this tiny little eddy (the calm water behind a rock where a kayaker will stop to set up for the next move) above a 20 foot waterfall called Gorilla on the Green River. This river has always been special to us and this eddy is a magical place with polished rocks and a large verical wall with moss and ferns all around. As I pulled into the difficult to catch eddy, he said “Nice job Baby, Will you marry me?” I was stunned. I said yes and we proceeded to kayak off the waterfall.

We got married in September 2007 on a tributary to the Green River. The only sound was of a waterfall spilling into the pool above us and the one exiting below us. We had just a few family and friends there. I wore a dress I got in Mexico for $20 and my Chacos. It was how I always dreamed it would be if I got married. 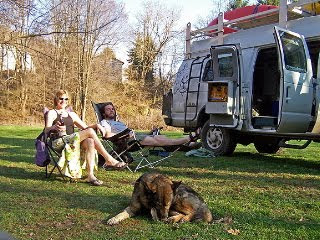 We continue to run our business–writing kayaking guidbooks, making outdoor yoga DVDs, teaching kayaking and going on adventurous trips as much as possible–I was right–this guy is really fun to travel and boat with! And as it turns out, if we can do that kind of stuff together, we can make it through all of the other hard times life throws at us too. Our relationship is definitely stronger because we adventure together–its an amazing thing to be out on a river working with your significant other as a team in order to excel and survive.