The last few weeks feel like a whirlwind. Right now life falls into a couple of priority buckets, so I’ll share where I am with each here today. Everything else has gone into the backlog, so that I can focus on progress where it’s most important: so I haven’t forgotten those of you who reached out as a result of my last couple of issues … I’ll orbit back in a few weeks.

I started my new job with WorkBoard and I am absolutely thrilled with my decision to join the team after my first two weeks of onboarding. I spent last week at HQ completing OKR coach certification training and getting a little bit of time around the leadership and broader team and the home office and by the end of the week I kept thinking to myself

I know this is the honeymoon phase, but I feel like it’s the kind of honeymoon phase where after this things get the good kind of hard and it just gets better and better.

I feel surrounded by the kind of excellence that calms me down and helps me focus. I don’t feel I need to keep my hypervigilant eye on everything because it’s either covered with a high degree of competence or it’s on the list for the future when the time is right (so I can put it out of my mind, for now). My colleagues and the leadership team are at the moment best described with this emoji: 🤩 and I’m grateful for this little bit of time to ramp and learn, and then to shift gears into my actual coaching and advisory consulting function.

PS: We’re hiring. And this particular role will be working closely with the team I’m on, so please send your great peeps?

One question I’ve gotten a few times in the last few weeks has been from other professionals who are surprised I’m as politically active (and outspoken) as I am.

Folks who know me over the long haul are unsurprised: my activism kicked off in the third grade when I (successfully) petitioned the lunch ladies to implement “milk equality” so that the “milk only” brown-bag lunch kids could buy chocolate milk on the days when the hot lunch kids got chocolate milk. It just didn’t seem fair to me that the “milk only” kids got plain milk when the “hot lunch” kids got chocolate. So I wrote a petition and circulated it around my classmates at recess and I’ve always thought back on that and thought: my parents probably regret ever telling me about the democratic process. And it’s also no accident that happened the year after I saw Geraldine Ferraro on stage in the Vice Presidential debate

anyone who says representation doesn’t matter — I’d like to share a case study to the alternative with you.

So yes. I’m politically engaged. And no, I’m not quiet about it (although I am thoughtful about it). When colleagues and other professionals ask me:

Do you ever worry about your political activity being an issue for clients?

my response is always the same:

If my political activity or positions are an issue for clients, then they’re really not going to care for the POVs and truths about their business that they hired me to uncover and share with them.

I’m powered by extreme curiosity, critical thought (or overthinking, depending on whom you ask), and vision of a brighter future. At home, at work, and in my activism. It’s exhausting for those close to me (and for some clients). But I like to think it’s lovably exhausting (or at least, helpful and worth the PITA factor, enough to keep me employed).

Contrary to what folks casually scanning my Twitter feed may assume, I’m a non-partisan Independent. I arrived at that position after many years of working campaigns as a partisan and then shifting gears to non-partisan issues-based work where I found that I work well across the aisle because I can usually* see things from all of the angles (and my time as an attorney taught me that the answer usually lies somewhere in between two positions).

*Except human rights, where I remain unapologetically progressive. I still laugh thinking back on the first draft of my brief in response to anti-equality arguments when I was a baby lawyer playing a very small part in the Washington marriage-equality litigation: “Are you f@#*ing kidding me?” and it was awfully hard for me to get past that one-sentence first draft but I did eventually manage to.

So sometimes I do pick a side (and when I feel strongly enough to, that’s when I’m off the bench and all in). And I respect and appreciate anyone who does, whether we agree or disagree

partly because it’s fun to argue

and partly because I still believe in the power of human connection and public service.

So be kind to the voice on the other end of the phone-bank line or knock on your door: it just might be me, spending my little bit of off-time doing what I feel compelled to, to help create a brighter and more human-centered future for us all.

My field trip to a Round Table Pizza in Menlo Park for a debate-watching party last week while I was in Redwood City for work.

At home, we’re adjusting to the new rhythm and all of its moving pieces: my job, our side projects together as Lobkovich Consulting LLC (which will be few and far between and carefully chosen), and prep for launch of what comes next for Chris this spring. Our whitespace time is a blend of household logistics and business planning and mutual commitments and still all the kid haulting and dog walking and laundry and dishes we’ve always had (probably more because we’re both home more these days). It’s a new dance for us and so far I really like it. We are both so fiercely independent that I don’t think we would have had the toolkit for this any sooner, but with a couple years of marriage under our belt (and honestly, a little time to decompress from past work life stress) (and Chris’s sometimes saintly patience with me and our differences) our gears are starting to turn quite nicely.

There’s sad stuff, too. The short version on that is that we just got back from a beautiful couple of days with Chris’s dad at his lodge in Utah. We were on dog delivery duty, to move Dilly from Utah to his new home in Washington, close to where we live.

Dilly, after 1,200 miles in the car in two days, happy to be off leash on green grass at his new home (but honestly, he was happy the whole trip). Best dog road trip buddy ever.

The long, familiar, beautiful hours of driving home gave us time to plan Chris’s business’s creative brief (send designer recos my way pls and thank you) and to listen to podcasts (aside from The Daily by the New York Times and one incredibly depressing episode of This American Life we kept it mostly light and funny), with some time also to reflect and mourn.

Chris’s mom, Michele, has paid a few visits since she passed. My new office is in a beautiful location on the water in Redwood City, so each morning before stepping inside I’d take a moment to gaze outside in a different direction. One morning, I found myself at the feet of a statue which, on closer examination, turned out to be a heron (there’s more to that story (but it’s already on Instagram, so you can click over)).

Thanks for the love that’s flowed to both Chris and his dad during this time. It means the world.

If you're new here, please find me at saralobkovich.com instead. 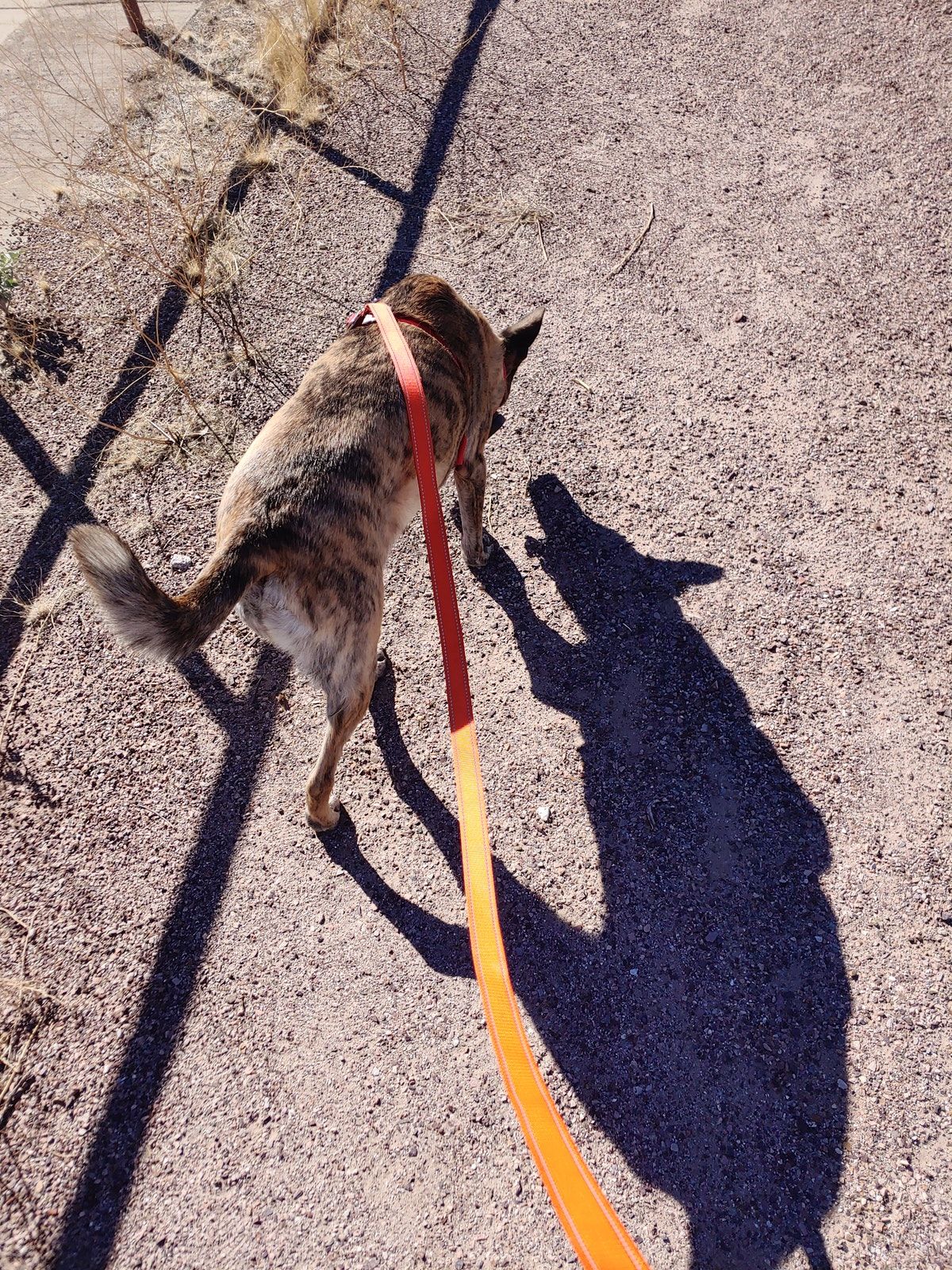 Video calls are not always the answer

“Walk and talk” meetings are good for our bodies, our brains and our work. 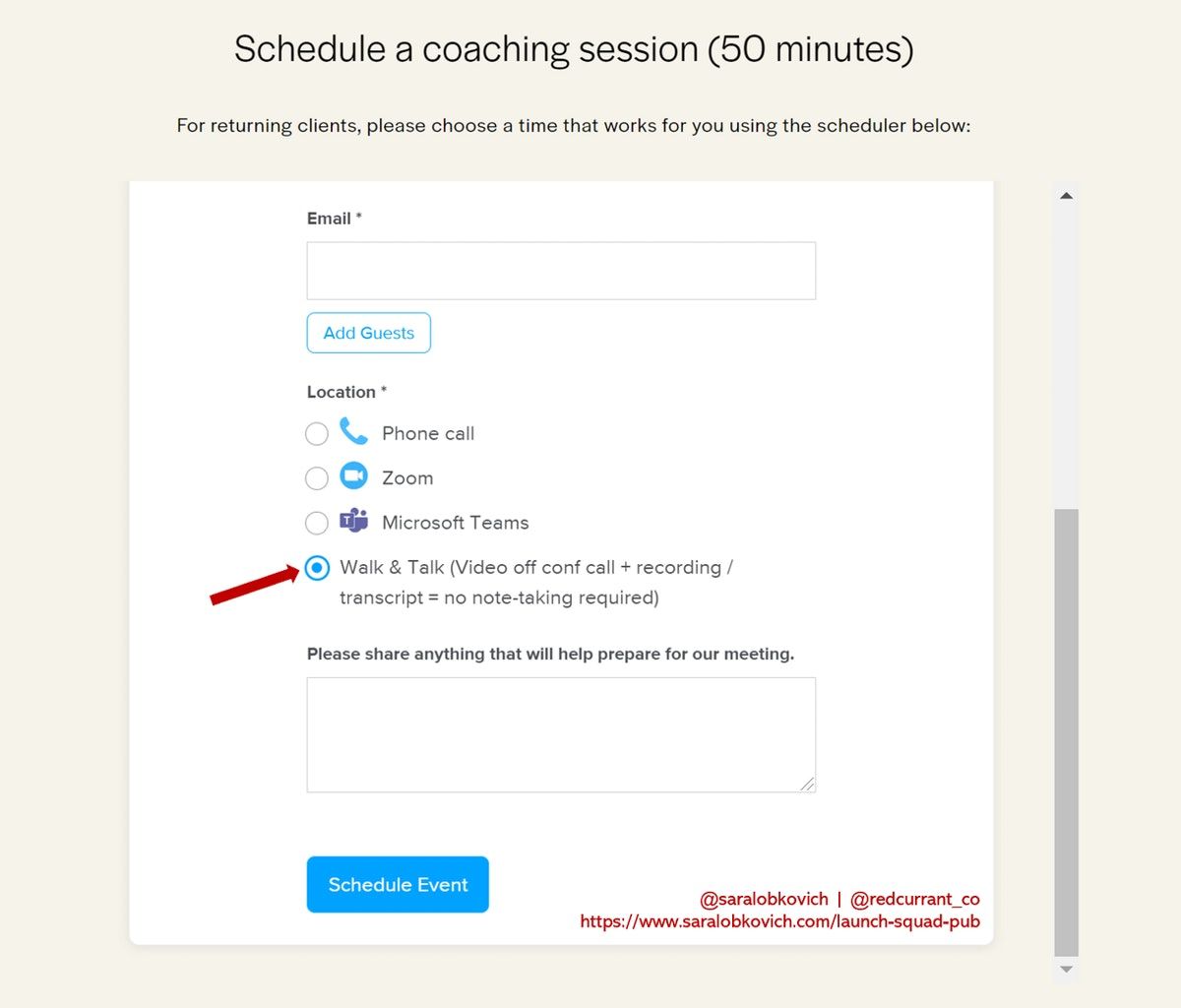