It’s been a funny week. I’ve been alternating between the highs of meeting fantastic folks in the climbing community and outdoor biz since I’ve been actively trying to get out of my shell and build those relationships, and the lows of discouraging or frustrating experiences related to some of those efforts. I prefer to focus on the positive, but if this sounds a wee bit down, it’s just ’cause this week hasn’t been all highs. And, did I mention, the weather report for the weekend — pretty much everywhere except New Mexico — sucks? Sigh. I guess it’s the universe’s way of telling me to wash my freaking dishes and get some rest. 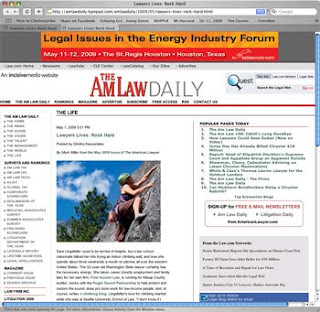 In an example of “saw that coming,” a story with me in it went live today on the American Lawyer blog (edit… the blog post has been removed until the editors can agree on how to address the notable safety issue in the original (and print) content. I’m leaving this up, though, since the print version is still out there).

The blog post is the companion to a print story slated for their current issue (which I believe hit stands today, though my local newsstand / magazine shop closed so I’ll have to wait for it in the mail). I was shocked when they contacted me about doing the story, since (y’all better get used to this, it seems to be my new mantra) I’m just a normal girl, I don’t climb sick hard, and I’m regularly described as “prolific” in my activities (climbing / photography / writing) but without regard to quality. I actually pointed the author toward a bunch of other notable climber / lawyers instead, but they decided to profile me.

I knew not to expect 100% perfection from a print magazine outside of the outdoor industry… given that climbing is a technical activity, with its own jargon, and I talk fast, so I can be a challenging interview subject. When I saw the blog version I thought about just 100% keeping my mouth shut, but since it’s public and will get indexed by search engines with my name in it, I wanted to just correct a few things, especially since the moderator hasn’t yet approved my comment on the post.

The biggies… I’m not running for Kitsap County Auditor. That was in the Spring of 2008, and I wasn’t selected, but one of my favorite people in the whole world, Walt Washington, was. Walt, my sweet — you don’t have competition in the form of me for your next reelection bid.

Second, there’s the blurb about Leavenworth:

“Leavenworth, Washington Bouldering and multipitch walls, and spots where she can tie a rope to her car’s bumper and rappel down. A plus for Lingafelter: no cell-phone reception.”

No cell-phone reception is a big plus in the Icicle, and oh, the bouldering and multipitch… yes, yes, yes. Rappelling off a car bumper… um… nope. In the comment to the blog post that I submitted but haven’t yet seen approved by the moderator, I responded thusly…

There’s absolutely no situation I can imagine that I would tie a rope to a car’s bumper and rappel down anything. I think what I said was that there are areas where the climbing is so close to the road, you can practically belay from your car’s bumper. Those are two very different things.

Don’t go out rapping off car bumpers and say, “Oh, RockClimberGirl said…..” ’cause I didn’t.

Little things… my girl Amy M was who first planted the nugget of climbing, not a law school friend… Amy had the good sense to go to Massage Therapy school, and is now an incredibly talented climber / mom / friend / wife / massage therapist. My heart is broken that she and her family are headed for DC… but my loss is the east coast’s gain, I suppose, and that gives me an excuse to get out and visit and sample West Virginia and the Gunks and some of the other places I’ve always wanted to go.

I also don’t recall saying the quote attributed to me in this bit:

Both climbing and the law have shaped her worldview, albeit in different ways: “You can seriously hurt yourself in one, and really change someone’s life in the other.”

But, even though I didn’t say it, I’ll be happy to claim it as my own. Yes, you can seriously hurt yourself in the practice of law, and you can really change someone’s life through rock climbing.

Those are the big things. There are little things, too, like my practice areas… but this post is getting longer than the original, so I’ve got to draw the line somewhere. Otherwise, they did a pretty good job and got some things right, so that’s cool. And, it’s fun to see my friend Kari’s photo there, also.

Oh, the discomfort of being a fact-oriented former copyeditor and armchair journalist.

In other climbing-light news, last night I went over to Seattle to join in and meet some great new folks and catch up with a few friends at the CascadeClimbers.com annual picnic, organized by my buddy Matt. The picnic is a tradition that started in the 80’s, and predates CascadeClimbers.com, but has been adopted by Matt and the CC crew. Matt asked if I’d do a slideshow, and I reminded him that I don’t climb sick hard, and I’m just a “normal climber” and his response was “normal climbers need apply,” so I ponied up. The other two slideshows were by real climber-slash-photographers… Wayne Wallace and Steph Abell’s slideshows were incredible. I kinda furiously edited pieces of mine at the last minute remembering that — after all, this is the CC crew, so I was worried there may be a handful of hecklers. It went okay, I think, though everybody disbursed pretty quickly after so only a few folks stayed around to clean up and chit chat. Folks were nice, food was good, it seemed that a fun time was had by all.

I arrived home to a name-calling, not-so-nice blog comment from someone who apparently found me via CC … so that didn’t leave the best taste in my mouth. But, that’s where my Teflon superpower comes in handy, and I get a whole lot more love than the opposite from my readers and friends and climbing partners, so whatever. Thanks for defending my honor, Darren… I think you get extra heaven points for stuff like that.

OK, that’s it. I’m off to have a good healthy dinner (nothing like two fantastic dinner invitations in one night… hard to pick just one!) and then hit the gym for a fun night with friends. For my buddies in New Mexico and Salt Lake, have a great weekend climbing while the rest of us sit home and watch weather.com hoping for better news next weekend.