Belated, but better late than never… here is my trip report for my recent long weekend at the Tieton climbing area, on US 12 outside of Yakima.

We pitched camp at Windy Point Campground, which was wonderful… rustic, but a step above our previous weekend’s stay at Frenchman’s Coulee. Windy Point’s water is portable but I wouldn’t say potable… but the campground is small, the sites aren’t on top of each other, and it was a nice place to stay. Kari, Don, Steve and I arrived all about the same time, and rolled out the “Veranda” (Kari’s enormous Costco tarp) to pitch the tents on (and, the outside couches (bouldering pads) and, to do yoga on) which took up most of the campsite… Steve was positively speechless at the size of the tarp, but came around once he realized it gave us an opportunity to walk around barefoot.

The party tents went up… two enormous tents, with room for all of our eventual arrivals. Ben Wills from the Internet came in late that night (driving in from Chicago; he spent 36 hours on the road and was a bit bleary eyed but stayed up to visit). We had a chill evening, then crashed, looking forward to starting out at Royal Columns on Saturday.

Royal Columns was a worthwhile stop… it’s beautiful, and the climbing we did was great. Gear leading, however, is still not my bag. Kari did her first gear lead (you go, girlfriend!) and did a fantastic job with her gear; Steve and Ben and Don hopped on a bunch of routes; and I belayed and hung out without getting right to it. Unfortunately, when I don’t get right to it, my head goes funny and I lose my nerve… so by the time I racked up for my first gear lead (a 5.7, The “Cutting Edge”, maybe?) I was *pretty* sure it wasn’t a leading day for me. Unfortunately, that turned out to be a self-fulfilling prophesy… I bailed off the route on a well-placed nut backed up by a bomber cam. Snacked, rested, and tried it again, only to bail at the same spot. Don, thankfully, rescued my gear and set a toprope so I could at least finish the route, and despite being disappointed in myself for not being able to pull myself together and finish the lead, I did get on some other climbs that day that were worth going back to. I didn’t keep track of the tick list, but Steve was on fire leading… we did, I think, a 10b crack and 10c sport route which were both fantastic. All in all, it was a good first day despite my lack of leading success. 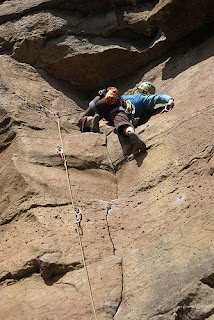 Day two we spent at Lava Point which was, indeed, as good as I’d heard (or better) (that photo is by Ben Wills, and no, my wrist isn’t broken, just oddly flexible). It may very well be my new favorite crag in Washington. It was a great destination for our party, given that our climbing range was pretty much 5.9 to 5.10+ so there was a lot for us to climb in a relatively small section of rock. The hike was grueling (not – it was a beautiful, casual wander through an alpine meadow-looking place, popping down to the base of the crag with a fantastic view of the dam on the Tieton river (I think – don’t know the geography 100% out there)). We climbed the place up… I don’t remember all the routes, but some of the highlights were Steal Your Face (10c), Cherry Garcia (5.9), Screamin’ for Rope (5.9 with a bit of a sketchy start), either B Weir of the Dead or Artificially Insteminated (both 5.10a, can’t remember which one we did, but whichever it was, it was ultra classic – very, very fun). It went on like this… lead a 5.9 or 10- to get a rope up, toprope whatever else was around in the 10+ or 11 range, clean, and have a snack. We had a big party that day, but even with a big party, we had a great day, with lots and lots of pitches. We pretty much all took turns leading, so it was a good lead day for the party. We climbed until we were all exhausted (except Steve, who I swear, never stops) then retired to the campsite for my unsuccessful attempt to find Jason and Dave’s cabin thanks to incomplete GPS directions from Brandon’s super fancy car. I was super, super bummed to not get to see Jason and Dave, although Chad the kayaker from Portland was a beneficiary of our wrong turn, and got a ride back to his car (and an earful about Ben’s romantic history in the form of a long story… it was pretty funny).

Day three we headed to the Cave, which started out windy with a committing 5.8 lead (?! … super fun, but it was heady) and the guys getting on some other routes. Ben Wills did his first sport lead ever (and tore it up — nice job, Ben). We moved down to the right to get out of the wind, and wound up nestled in a beautiful little section of trees, also populated by an enormous number of bees. I, as usual, got stung while belaying… I was thankful for the size of our party, so that Ben could pull the stinger out while I was still on belay, and Kari got the sting salve. It was a hell of a sting… a week later, and my foot still itches. If you’re allergic, be prepared with a bee kit — I don’t know if they were just passing through or if they’re resident, but we had bees at the base and at the start of routes most of the day. The guys lead a bunch of 10+, putting on quite a ropegun show for day three. I fell in love with one of the world’s most perfect 10c’s… Caven Image, at Oak Wall. The starting crux was tenuous but not that bad; higher up I hit the real crux for me… a sequency section where I couldn’t see the holds. I worked it for awhile (not aware that Steve, my belayer, was in pain with something in his eye) then put a sequence together… finished the route and then worked the sequence again after lowering partway down (all the while, with Steve in pain and me totally unaware). His poor eye…

I hoped to toprope the route clean, but it wasn’t in the cards for that day… I’ll definitely be back, though.

Peter, Steve, Don and Ben all pulled hard most of the day, and for a third day of a trip we got in a fair amount of climbing before heading back down to the cars.

Notice… I just finished a Tieton trip report, and there wasn’t a single mention of snakes?

I don’t want to jinx myself, and I’ll happily carry my insurance, I mean, my snake bite kit, the next time I’m there. But, at least this trip, no snakes.

I’ll add photos as I get them from our trip photographers, but here are two to start… 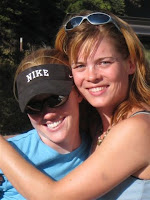 Perhaps we need to start a series of Kari and Sara pictures. This, again — to be more clear, and to have less of a negative impact on Kari’s dating life — is Kari, my heterosexual climbing life partner and I at the end of the trip, right before the trip back to Yum Yang in North Bend, where almost all great climbing trips come to an end. Kari and I have been out more than we’ve been in this summer, which has been great for both of our climbing, and not so great for both of our hair (entirely too blonde, now) and complexions (can you say, Hello, Freckles!). Thank you, Steve, for this and the next pic… the “team photo” also just before we all headed home. From left to right… Peter, Ben, Kari, me, Don and Steve. Let’s do it again soon, eh? 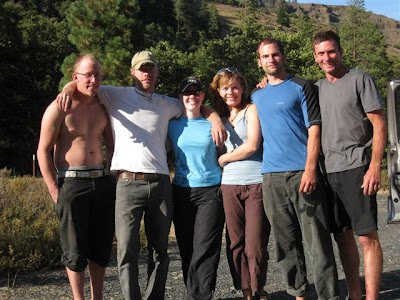