During my time on the road lately, I have been catching up on some reading. Continuing my quest for self-improvement reading that doesn’t suck, I picked up a copy of “59 Seconds: Think a Little, Change a Lot” by Richard Wiseman.

When I got to the chapter on “Attraction,” I was quite amused to find a study assessing the “attractiveness” of various sports and activities to members of the opposite sex.

Perhaps, such women don’t actually have exposure to the reality of extended periods of time without showers, the wounds we all incur from jamming our way up and stumbling out way down, and the particular loneliness that can come with being in such a stark, intimate setting with another human being who doesn’t seem to care much for you, other than as a weighted object that can hold a rope…

There are definitely unsexy times in climbing.

According to the study:

“Women’s choices appear to reflect the type of psychological qualities that they find attractive – such as bravery and a willingness to take on challenges – whilst men are more shallow, looking for a woman who is physically fit but not challenging their ego by being overly strong.”

In a bit more detail:

“The work involved over 6000 people indicating which sporting activities would make a member of the opposite sex more attractive. Results revealed that 57% of women found climbing attractive, making it the sexiest sport from a female perspective. This was closely followed by extreme sports (56%), football (52%), and hiking (51%). Bottom of their list came aerobics and golf, with just 9% and 13% of the vote respectively.

My next logical thought was… well, what do men think of the attractiveness of women who climb?

The author was kind enough to point me to the full study results, indicating that 41% of men find a woman more attractive because she climbs. That makes women who climb about as attractive to men as women who cycle (39%) and hike (41%). 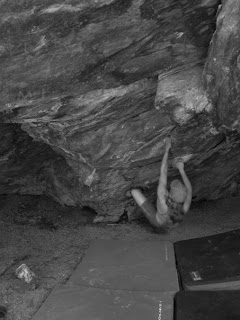 I found that interesting. I’ve been privileged to spend a fair amount of time in the last few years around men who find big biceps and broad, strong backs attractive, at least when I’m among men who also climb.

On occasion, though, I find myself in settings with non-climbers. I’ve been asked, incredulously, while on a massage table or wearing a back-baring summer dress:

“What do you DO?!?!?!” … where the sentence would logically be concluded with “to have such a beautiful, strong, back and arms?” but never actually was.

Or, there was the time that I found myself at a New Years party, chatting weight training with one of my guy friends. Another man interrupted our conversation and suggested something to the effect of “Honey… you don’t need to weight train… you need to get on the cardio machines!”

My muscles make me feel slightly more testosterone charged than I felt as a non-climber… and we’re both lucky that I restrained the flash of a thought of cocking back a fist and punching him in the nose.

Based on all of that, I’d developed the theory that there may be a very small percentage of men who are actually interested in dating climber girls, in reality.

When you’re a broad backed, strong armed climber girl, those men can seem rare. It’s nice to see a statistic that indicates that they may be out there.

I could go on all day… about whether the survey respondents have any idea what the reality of climbing is… about my own experiences… and about how the responses of actual climbers may vary (or, may be a red herring, because many of us daydream about finding a romantic partner who climbs, but the reality of a happy climbing romantic partnership has proven elusive for many).

Strength is sexy… nature is sexy… beautiful places are sexy… and the mental calm that climbing requires (on its best days) is incredibly sexy. I didn’t need a study to tell me that.

Most of us climber girls love our muscles. We may joke about our man backs, or how we look like manimals in our swimwear… but we also love and cherish our muscles and the strength that climbing brings us. It’s reassuring to know that somewhere around 41% of men agree.