I can’t even remember the last time I wrote directly, although some updates have gone up on other websites… but today I have the luxury of a few minutes at a computer, so here’s an update on the last few days.

The trek through the Nepali countryside has been blissful… comfortable accommodations, great friends, lots of laughter, and many steps forward through some of the most incredible scenery I’ve ever seen. I’m a fair to middling photographer, and even I can’t seem to take a bad photograph here… they just keep racking up on my camera, with only the blurry ones deleted. I’ve also found myself shooting more video than I expected… as much to try to record the sounds of this place for myself as anything else. I can’t sit still long enough to piece together any interesting video compilation since despite carefully working on pressure breathing while I type (talk about multitasking) I’m still not yet a master. My respiration rate tends to slow a great deal when I work on the computer, and it’s critical I keep my oxygen levels up.

If you hadn’t heard… on day 12 of our trek, after three nights in base camp, we decided unanimously that I had to go down. 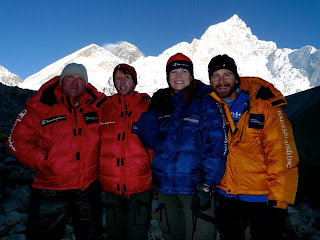 I was having some trouble adjusting to the altitude once we left Pheriche on the way up: mostly, a moderate headache. But, when I was moving I felt better, so each day I’d head up with the team, thinking of it as an acclimatization hike, with the intention to head back down if my symptoms didn’t improve, but my stubbornness kicked in each evening and I never actually headed back down. By the time we reached base camp, I had more symptoms of AMS – a more severe headache; very suppressed appetite; and nausea. At first, my symptoms were managed with over the counter headache medicine and careful snacking; but by the evening of day 11, my symptoms plus my pulse/ox levels merited a team meeting. We decided that we’d see how I felt on the morning of the 12th, and either do a serious acclimatization hike to Kala Pataar if I was feeling up for it; or, head down to an altitude where I could recover if I wasn’t.

By the morning of day 12, there was no argument. I was going down. The headache no longer responded to over the counter pain meds, and the pain was so bad I could hardly function. I had great company for the trek back down to Pheriche – Layla, one of our trekking leaders, as well as friends David, Lavinder and Paul were all scheduled for the trip back to Pheriche that day – so we made our way slowly down.

When we walked through Gorakshep, I saw a pony warming up out in the sand dune, and thought for sure Layla was putting me on a “Khumbu Ambulance” for the trip down. Little did I know at the time – Layla was seriously considering it! But, the entire team made it into Pheriche in the early evening with the rest of the group, without the aid of any ponies.

We hadn’t even dropped packs in Pheriche when Layla whisked me to the Himalayan Rescue Association hospital to a greeting full of concern and care by Jen, Andy and Rachel. After just a couple of questions, Sara was full of pain killers and strapped to an oxygen mask, and laid down under heavy quilts to get some rest. The hospital was incredibly busy… patients and locals walked back and forth through the rooms the whole time, which was actually a welcome distraction. After the oxygen, and getting my headache under control, for the first time in days, everyone around the dinner table ate a pretty substantial meal, breathing in the relatively thick air at Pheriche.

I settled into a routine in Pheriche… breakfast with Todd, who was also down to recover from a chest cold; a visit with my new friends at the Himalayan Rescue Association; a walk, or, as I got better, an acclimatization hike; lunch with a random trekker in the lodge; and then an afternoon of rest and then dinner with Todd. After hour activities most nights took me to the HRA, either just for time with my new friends there, or one night, a movie night (action adventure movies aren’t the best choice for recovering from AMS since I found I held my breath through most of it – alas, even with me there, the girls at the clinic didn’t outnumber the boys, so “Taken” with Liam Neeson it was).

On the morning of day 15, we saw Charlie, Mike, Kenny and Aenea off via helicopter, for their speedy trip back to Kathmandu (a distance that took us six days to trek up, they covered by helicopter in a matter of minutes). Then, Wally (our other trip leader) and I headed to the HRA for a discussion of my options.

I can’t take Diamox, a drug that is used to aid acclimatization by increasing your respiration rate (and in other ways) because of a drug allergy. Doctors across the Khumbu had conferred about my case, and my goals up here in the mountains, and came to the conclusion that my two options would be to try again to acclimatize on my own through a slow ascent, or to try an experimental course of another drug, with the hope that it would aid my acclimatization.

Wally and I had one last sit-down with the doctors at the HRA to discuss my options for my return to basecamp, and unanimously decided that the best course of action would be to ascend slowly, and hope that my body would acclimatize on its own. With that, Wally, Cami (one of my favorite Sherpa) and I started the slow ascent toward Loboche, with a gain of nearly 900 meters, for an overnight to acclimatize.

My arrival at Loboche the second time around was a complete change from the first. On day 16, we headed up to Gorakshep, the last lunch stop on the way to base camp. I did great at first, then started to get a headache after a couple of hours in Gorakshep. I was extremely discouraged, at first, but then thrilled when the headache responded to a low dose of an over the counter pain reliever. We made it into base camp in great time, and I was able to spend the evening with the climbing team before they headed up to Advance Base Camp this afternoon (Day 17). I had a great night’s sleep that night; my appetite is excellent; and my headaches are minimal. The photo at the start of this post is of Wally, Todd, me and Scott on our return to base camp.

Now, it’s just me, Wally, Cami (although he’ll be providing support on the mountain for the climbers, too), Ang Tshering, Ang Temba, and the cook staff here at base camp. From the bustling herd we started with, our numbers have dwindled significantly.

I didn’t come here to summit Pumori, although if I’m 100% honest the thought was in the back of my mind the whole way up here, and even last night, I dreamt of climbing way up there, up high, my crampons and ice axe digging into the steep terrain with a huge smile on my face. It was hard to see the guys off this afternoon… partly because I feel a bit like a worried mama, and partly because it’s hard to not be going with them. But – given everything, I’m just incredibly thrilled to be back at base camp. When I left on day 12, the thought did not cross my mind that I wouldn’t be back in a few days. I didn’t even roll up my sleeping pad, or pack my tent. I left everything here, ready for my return. Somewhere along the line in Pheriche, when my symptoms weren’t resolving as quickly as I’d anticipated, I reset my goals to just – if the universe would let me – allow me to get back to base camp.

I’m thrilled to be here. I’ve got lots of work to do to help with communications for www.climbwithus.com while the guys are on the mountain, and I have a few reset climbing and trekking goals of my own, if my health continues to be good, which I’m optimistic it will.

Mostly, I’m just still incredibly thrilled to be here. I can’t believe how much I’ve learned, and how attached I’ve gotten to my travel companions. I feel like a whole different person this second time up to base camp – I feel healthy, and strong, and I’m having a truly lovely time just being here. I feel like climbing.

Neither my words, nor my little camera, do this place justice. Our base camp of several tents is nestled on a large talus field, next to a lake at the base of Kala Patthar and Pumori. Mount Everest and Nuptse are constant companions, whether by sunlight or moonlight. The starkness, the severity, and the beauty are absolutely beyond my expectations, and at times, more than I can believe. We rarely actually have rest time – I’ve been in a state of constant motion and then sleep, except for my rest days at Pheriche – but when I do, I find myself just sitting, staring up at Pumori or Everest and the incredibly blue sky. Taking in the sounds of the radio from the cook tent; the crowing of birds; and the chatter of the camp staff.

While I think of home often, and miss my friends and family (including my part-time dog Hana, who I can’t wait to see) I’m just so pleased to be back at this, my other “home.” Thanks so much for all of the well wishes and support – it’s been truly appreciated! Think positive thoughts for our guys who are now up on Pumori, and I’ll keep you posted as best I can!

Again, thanks so much for your support, encouragement, and positive thoughts. Take care, and have fun, in your own adventures!