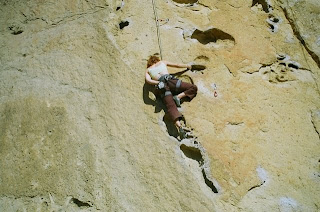 It had been almost a month since I’d been outside… it was so strange to have my bills paid, my laundry and dishes done, and my work — well — not done, but not exploding. So, time for a trip to Smith.

About twice a year, I participate in a herd climbing trip… with a large group, including usually some newer partners, and an unclear organizational hierarchy and loose organization period. Herd trips have their ups and downs. They generally remind me of why I travel best in a smaller pack; but on the other hand, the more people, the more there is to laugh at, so what herd trips lack in peace and quiet and number of pitches, they make up for in humor.

This trip to Smith was a herd trip. Don, Teresa, Kelly and I all piled into my wagon for the trip down, meeting Kari in Tacoma. We headed out after work on Thursday, sights set on sleeping in the warm and cozy comfort of Kari’s parents’ house in Bend. Teresa “kept Kari company” for the late night part of the trip (aka, slept in the passenger seat, remarking once about go karts, if I remember the story right). Don and Kelly “kept me company” for the late night part of the trip… Don sacked out in the back seat napping, and Kelly awake but mostly silent in the passenger seat. It’s never a fun drive after work… everybody tired, including the drivers. But, we made it to Bend in good time, and settled in to our temporary home with Kari’s parents. 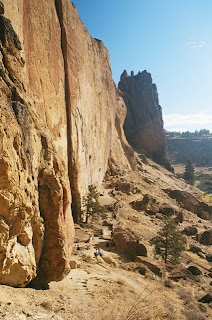 Friday morning brought a drive through breakfast and relatively late start into the Crooked River valley. Kari and I both had objectives for the trip: mine was to lead Helium Woman (5.9, Dihedrals area); Kari’s was to lead Hop on Pop (5.8, Peanut). We both had history with those routes… I’d admired Helium Woman for the last couple of years, watching 5.10 climber after 5.10 climber get bucked off the route. I finally got a chance to work it on a borrowed toprope earlier this year, but still felt like it would be a committing lead. Kari and I climb Hop on Pop every time we’re at Smith, but she had yet to lead it ground up. Don and I had made a tick list of the best 5.9s and 10- routes, figuring that would keep us busy for three days at least. Kari donated her Canon 35 mm to the cause, so I was again at peace with a substantial camera in my hands, though I haven’t shot film for about a decade so I’m pretty rusty. At least we got a few pictures out of it. And, as usual, the best shots (I think) are my climber-portraiture). 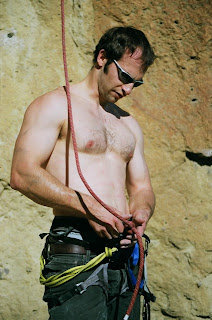 Even for a Friday, the frontside was busy, so we worked our way down looking for open routes we could do. Helium Woman happened to be free, as was Captain Xenolith (5.10a). I took a deep breath, and racked up draws for Helium Woman, while Kelly lead Captain Xenolith.

I lead Helium Woman, my nemesis, clean, on my first try. It was awesome. I knew the route well enough to know when I’d finished the crux moves, and let out a loud “Woot woot!” in celebration even though I usually know better and keep my mouth shut until the final draws are clipped. The lead felt great. I was confident, calm, had fun, and felt strong. I’ve gotten much stronger this season, and while I still have a lot of work to do on my “bold,” my body has gotten a lot stronger. 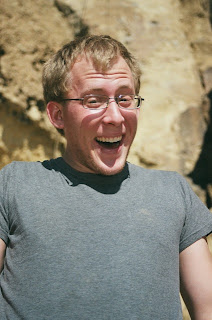 Captain Xenolith was hard — even Kelly had a little Elvis leg going on it and he is a local ropegun. We took turns on Helium Woman and Captain Xenolith, Kelly worked Chain Reaction (12c) for a bit, then we headed for the quieter and shadier Phoenix Buttress to finish up the relatively short first day. Don lead Phoenix (5.10a) which indeed looked like the best route on the cliff, if you could get over the height of the first bolt (I couldn’t). I was inspired by JT’s Route (5.10b) so started up it on lead thinking, “wow – this feels great, this is fun, holy cow, I’ve gotten so strong and confident…” and then WHAMO, the 5.10b section hit. I seriously didn’t think I was going to be able to get up it. I don’t know how long Kari had me on that ever-so-patient belay, but it took AWHILE. I did, ultimately, get the rope up, complete with one really heinous and scary clip… so I’m going to consider that an accomplishment. The whole time, all I could think was, “This is going to be SO much freaking fun on toprope!” and it was. The route is really sustained even on toprope, but I’d recommend it. Kari worked it like a total champ… she’s gotten super strong this year, which is super fun to watch. 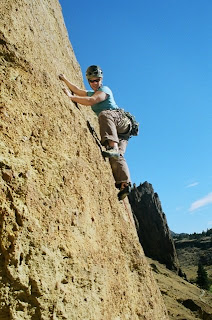 Day two, Saturday, Don made breakfast at Kari’s parents, so we were all well fed for our second, also not-so-early day in the park. We met up with Alex and Victoria here and there during the day, which was great. Kari woke up with Hop on Pop on the brain, so we decided to start out at the Peanut area. Ropes went up on Snuffy Smith (5.9) (to the left of The Peanut, on the far right of 4th Horseman), Hop on Pop (5.8) and Pop Goes the Nubbin (5.10a). After a warm up on Snuffy Smith, Kari dispatched Hop on Pop like a pro. For a 5.8, it’s a heady lead — I’ve seen 10- leaders have a hard time on the start (and have stick clipped the first bolt myself most of the times I’ve lead it). Kari did a great job, and let out her own hoots of happy after getting through the crux. 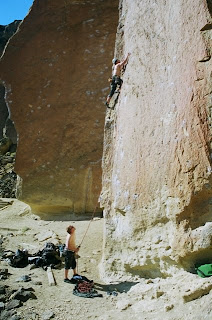 From there, the guys were sick of slab, so we headed further down with the hope of getting on Wedding Day, a classic 5.10b in
the Dihedrals. Don hopped on the sharp end, and did a fantastic lead of a tough, sustained 10b (remember, this is the end of his first season climbing). The whole route was sustained; the layback at the top to the chains was a real surprise. The route was tons of fun, and I appreciated the ropegunning since I was pretty tired from day one.

I think from there we headed to Combination Blocks where Don did a solid lead (with a gutsy fall) on Double Trouble (10b), another of my favorite topropes. We did Name Unknown (10a) also — I think Alex lead it, I was one of the topropers, and had a blast until I started to try to finish on Ring of Fire (5.11c/d) instead of my route, and got shut down. Oops. After the folks on the ground told me that I was trying the 11 finish, I switched back left and got back on route, which felt much better. 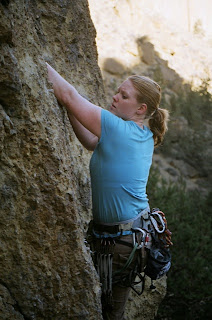 Kari and Teresa got on Dancer and/or Jete (I can never remember which is which) and had fun on that.

After that we headed for Morning Glory wall to get on Nine Gallon Buckets (5.9) and its extension (10c). I’d climbed the 10c pitch on toprope but haven’t lead it; mostly that night we worked the 5.9 pitch into the waning light, although Kelly did lead the 10c all the way up. The hope was to come back to the route first thing in the morning of day three, and work the 10c extension.

In between all of that, Kelly Cloud, Alex and Victoria got on Really Freaking Hard stuff. I don’t keep track anymore… I just watch with awe as they either send or take ballsy, bold falls. Someday. 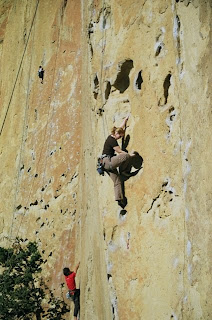 After a soak in the hot tub (no kidding) and sleeping in a comfy bed (also, no kidding), I was good to go even on day three. It was awesome. We got up, packed up, and headed into the park for a short last day before heading home. Unbelievably, we walked up to Nine Gallon Buckets just as another party was wrapping up, and we all worked the route, including the 10c extension. 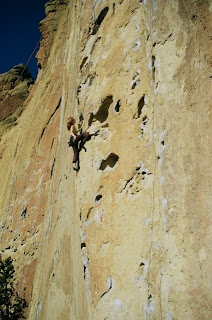 I still have yet to lead it, but worked out the beta for the crux again on top rope, and I might have to make that a goal for next season. After taking turns there, we met up with Alex and Vic up in Cocaine Gully, where Alex earned points with me by having a rope up on Chicken McNuggets (10b), one of the routes on my wishlist for the trip. I’d toproped it before but hadn’t done it clean; this time, I TRd it clean, so now I have to go back and lead it. It was every bit as fun, exposed, and hard as I remembered, and it’s definitely one to keep on the leading tick list.

Peter, Don and I took our turns on Chicken McNuggets, then headed to the lower gully to try to get on the 10a down there that Peter had his eye on. We just missed our chance, and couldn’t wait around, so consoled ourselves with a Five Gallon Buckets (5.8) leadfest to finish off the trip. 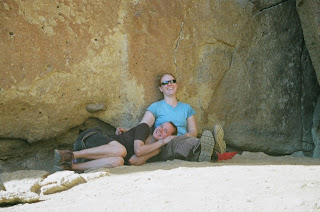 My minimum acceptable number of pitches in a climbing day is five… on this trip, I managed five pitches on Friday and Saturday and four on Sunday. So, it was fewer pitches than normal, but that happens when you’re with a herd, with varying levels of experience and comfort. On the other hand, we climbed harder than usual — mostly sticking to our 10- ticklist — which was awesome. Considering that my goal was to lead a 5.9, and I did that first tie-in, the rest was just frosting. Really, really good, really fun, really inspiring frosting.

Looking forward to the next one, already…