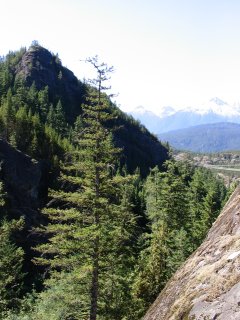 We rolled into Squamish about 11:45 on Friday night, too late to get a campsite so we tested out the sleeping-on-the-seats option in Chris’s Honda Element. The verdict? Seat sleeping is ok for a ferry ride, not okay for overnight. Luckily the seats in the back fold up, so second night we were much happier on our boulder pad. No pictures of the world’s second smallest RV but we’ll try to take some the next time around. We’re hoping for a national parks camping tour at the end of September, so stay tuned. 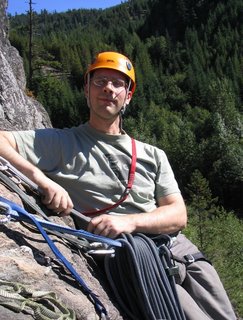 The climbing this weekend was stellar, as always in Squamish. We spent Saturday morning on things we could safely and happily lead at Cheakamus Canyon. We started at Conroy’s Castle on Emil the Detective, a classic 5.8 slab route with one move that felt 5.9 on lead, but it was close to a bolt so super safe. It was one of the most fun leads I’ve done — nice and long but achievable and not scary — and a nice place to practice basic multipitch techniques. This beautiful view above is from the belay ledge at the top of the first pitch of Emil. Chris went up it and anchored in and belayed me from above, so we got to enjoy a few minutes on the belay ledge at the top of the first pitch together. This pic is of Chris looking studly at the top of Emil. Observe his lovely rope management. 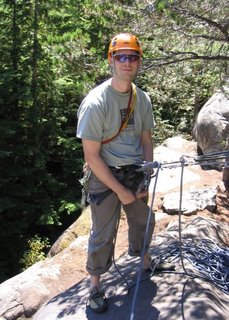 We then went on to another nice easy/moderate route a little further down the road on the Crest crag. Our guidebook said it was a 5.7 first pitch, 5.9 second pitch, and Chris lead the first pitch without even a pause. He belayed me from above and then we thought about going up the second pitch but the start to the first bolt looked a bit trickier than I wanted to take on given the fall geometry, and Chris wasn’t feeling like leading it so we talked out our options and decided to play it safe, call it another good multipitch-skills practice, and rap off. Here’s Chris on the super happy belay ledge. Observe the “climber hunch” he has worked so hard to perfect. 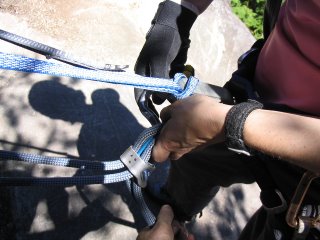 And, this pic is of my rap setup (in progress; this is before my backup prussik went on). In retrospect we’re glad we went for safe, since it sounds like ratings on the second pitch are in a bit of disagreement — some say the route is 5.8/5.10a for the first and second pitches; leading eleven bolts of 10a in full sun when we were already tired may have turned what what a lovely, safe, confidence-building day into an epic. The next pic is me on rappel. Chris told me to smile. It’s an attractive look, I know.

We caught up with friends after that and got to toprope a 5.10b on Forgotten Wall that we wouldn’t otherwise have gotten to try… it was excellent to get a chance to really jug haul and climb something harder but fun and safe, outside. By that point in the day, though, we were exhausted, so we hit the pub for yammer jammers (the best yam french fries on the face of the planet) and dinner and then retreated back to the Element for “a nap” in the Chief parking lot around 8:30pm. After a nice little nine-hour “nap” we hit the Chief boulders for a serious spanking. I am astonished at how hard outside bouldering is for me. I’m a fairly competent beginniner-to-moderate climber, and I can’t even get on most of the V0s up there. Chris got right on and threw down a V0 and V1 at Titanic North and then Squamish Days (V0) — he’s a more gutsy boulderer than I am, for sure. I have to admit — I got frustrated. But, ultimately I was able to project and finish the V0 at Titanic North, which felt good. I’d do that one, then go to another project and fail miserably, then go back to the V0 to feel better about myself. Despite the frustration, it was fun to pull hard for a bit, and we had a lovely morning in the happy forest.

All in all, it was a weekend very well spent. This was our second trip up, and I was again suprised at how much fun we have climbing in Squamish.

Now, back to the day job…