I posted yesterday that apparently I’m incompetent to judge a romantic outdoor story contest by myself. I need your help.

Here’s story number one in the series, by Lauren Yant (the super cool girl behind Ruthie Pearl bags, and, author of the Font guest post here at RockClimberGirl.com). Save your voting until all the stories are up (I’ll do a wrap up post at that time)… but read on, and enjoy! Here’s Lauren’s story. 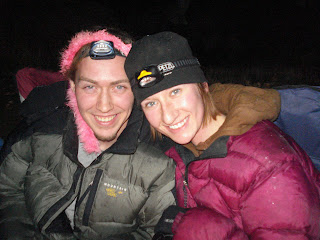 I moved to Salt Lake City in May of 2007 for love…but what I thought would be my one-and-only ended up not working out. I was heartbroken; I had no where to live, no friends to call, no couches to crash on, nothing, really. In my state of utter and confusion, I decided to head to The Front one night to blow off some steam. Now, I should preface this with, I WAS NOT A CLIMBER. I had only recently been introduced to this “bouldering” concept a few weeks ago by my ex. So, you can imagine…I wasn’t graceful. I had no technique. I was wearing grey sweatpants with “VAIL” plastered across my ass.

Moving on. I began to climb THE. HARDEST. YELLOW. DOT. EVER (AKA, one of the easiest problems in the gym), and getting near the top of the wall really scared me. I couldn’t handle the thought of falling to the ground, padded or not. 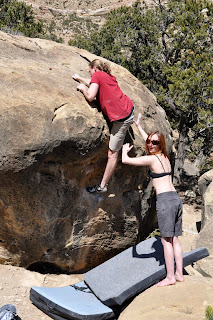 The gym was not crowded on that Wednesday night–probably because all the “real” climbers were hitting up Little Cottonwood Canyon or something, you know, cool. But there I was with about three other climbers…and one in particular who caught my eye.

I had noticed him at the gym many times before, but of course, since I was in a failing relationship, I didn’t act on my attraction. He was tall and had a long, dark blonde ponytail. I thought he was cute, but really just more interesting to look at. (I have one of those staring problems when it comes to people at the gym). I had a crush. 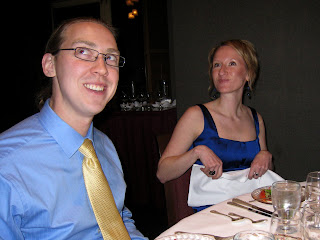 So there I was, climbing this uber-hard, yellow-dot problem (haha), and all the sudden, I heard someone saying, “Come on, Lauren. You got it. Come on.” I looked down, and there he was…spotting me. I hadn’t asked him to spot me (and how the heck did he know my name?), but he was doing it. And he was cheering me on. I reached up and grabbed the top of the wall, and this huge rush of exhiliration came over me.

We proceeded to strike up a conversation, and I learned that he was an “engineer for an outdoor retailer.” I thought that meant he smoked a bunch of weed and designed carabiners or something. I mean, he did have a ponytail. 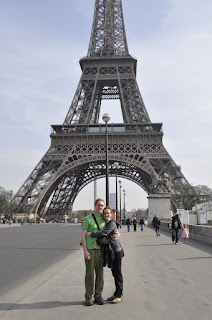 I finished up my session, and walked out to my car. He followed close behind, and finally asked, “Sooo….do you ever go climbing outside?” I replied, “Um, no, I’ve never been. I don’t know how. And I don’t really know anyone here.”

He said, “Well, if you want to go sometime…” I quickly stopped him and explained that I had just gotten out of a relationship and was trying to take things slow and all those other things that nervous girls say. He responded, “Wait a minute, I wasn’t asking you on a date. I was just asking you to climb.” FAIL.

Anyway, he offered me his number, and I suggested that he IM me instead. Turns out, he was a SOFTWARE engineer–you know, the well educated and smart kind. And me? I’m just a computer nerd. So the next day, we spent all day chatting back and forth on AOL Messenger.

That night, I went to a concert at the Gallivan Center with my girlfriends. He showed up, braved several hours with my super prissy coworkers, and even brough me dark chocolate. That’s right, DARK CHOCOLATE. I knew, then, that he was a keeper. 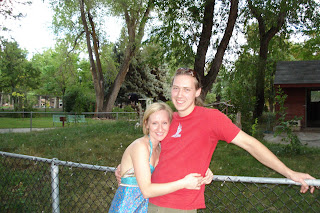 We’ve been dating now for going on two years, and we’ve climbed all over the place: Horsepens 40 (my home state, Alabama), Bishop, Little Cottonwood Canyon, Ibex, Joe’s Valley, Big Bend, Price Canyon, Fontainebleu…and next? We’re headed to Thailand in November to climb at Railay Beach and to…yep, get married!