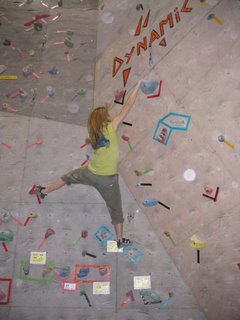 Well, actually, everybody rocked it. Tonight’s comp had an awesome turnout, and the vibe was super positive. Some of our favorite folks were there — the picture is of V nailing a bad-a** boulder problem — her finish was out of this world. In a crowd of incredible sportsmanship, Eli gets my “sportsman of the night” award for cheering on and encouraging the other guys in his class and for finishing his first 10c. Liv – check out your video on myspace. The “snappy retort of the night” award goes to Lani (whose name I don’t know how to spell, but do now know how to say) for snapping back at Chris:

“Isn’t there a bouldering pad over there that you can clean?”

Now, that’s not a direct quote, but it’s close enough. The back story is that several months ago we went on a climbing trip with the original Sarah and her climbing team and other friends to Squamish, BC. Chris borrowed a bouldering pad from our friend Glen, and was taking very good care of it, as a result. Taking good care, to the point that while everybody was packing up camp, and busily making breakfast, and doing other types of productive camp/climbing things, Chris was picking specks of dirt and grass off a bouldering pad that was…

about to get tossed in the dirt and grass and get dirty and grassy all over again.

Back to the comp – most of my photos didn’t turn out because of the combo of dirt & chalk + flash equation, but I’ll get the good ones out to folks as soon as possible. Hugs to all, and thanks for a great night!