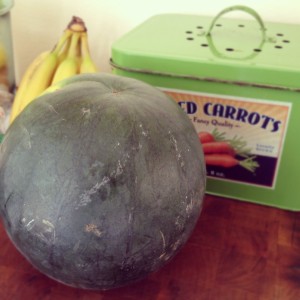 I picked up my CSA box yesterday, and was excited and a little intimidated to see a heavy, large, dark-green skinned squash in the box.  It seemed a little early for winter squash, but that also made me a bit excited — I’ve been struggling to adjust to the colder temps that Fall has brought, so a little winter squash soup sounded like just the thing.  I saw down to work, the squash calling me from the butcher block in the kitchen, and looked forward to making it into something yummy and warm when I took my mid-day break.  I snapped a pic, and instagram’d it, asking what my friends would do with a squash like this, and the front runner suggestion was Thai Red Curry, which sounded just perfect.

So when late lunchtime hit, and I had a few minutes to start the preparatory steps of slicing and roasting the squash to have it ready for soup later today, I washed it, and set it on the butcher block.  I pulled out the only large knife we have — a chef’s knife — ready to do battle with the thing… I’ve wrestled with squash prep a few times a year for years, so I knew what I was in for.  I considered which axis to slice it on to make seeding easier, and wondered if there would be enough seeds to bother roasting.  I thought about what seasonings would go well for the roasting step, turned on the oven, and pulled out the perfect squash-roasting pan.  I pushed the point of the knife firmly into the squash, and started to slice around my chosen axis, and the knife glided through the skin much more easily than I expected.  When I started on the other half of the cut, delighted that I’d finally happened upon an easy to cut squash, the two halves fell away and I realized with bemusement that what I had before me was a watermelon.

It wasn’t a squash at all.

Now this is fitting… watermelon are my best girlfriend Teresa’s favorite food, and this week will go down in the annals as The Week that Teresa Moved to Idaho, so how could I be anything other than amused that the universe sent me a watermelon as an opportunity to reflect on her departure, be thankful for how much Teresa means to me, and look forward to the next time I get to see her.

But as I bemusedly sliced a hunk of the fruit into a bowl, salted it, and picked up a spoon for scooping out round bites to make up my lunch in place of the savory, warm roasted squash I planned on, I reflected on the other lessons the universe was reminding me of.  Assumptions and expectations can lead to disappointment (or if not disappointment, at least, unexpected changes of plans).  And, paying attention, and actually using my senses — touch and sight, for example — instead of just letting my brain do all of its quick work, is important.  I looked at an object, I made a snap decision about what it was (partly based on my own desires — I kind of probably wanted a squash, so I made it a squash in my head).   Where instead, if I’d looked at the box of produce before me with an open mind, I would have  seen something unfamiliar and picked it up with curiosity in my fingers — I would have put it to my nose, and felt the quality of the skin, and looked at the colorings and markings of its rind and known before the knife pierced the skin that I was cutting into a watermelon.