I have yet to travel internationally for climbing (not counting Squamish), or anything else, for that matter (not counting Canada) — but luckily I’ve got friends to serve as scout party and inspiration for my future international adventures. When Lauren Yant tweeted that she was on her way to Fontainebleau, in part for a climbing trip, I asked if she’d be willing to write a guest post. She agreed, but then when she got back, she was discouraged because they’d had lousy weather and hadn’t gotten in as much climbing as planned. We chatted a bit, and my take is… sometimes that’s what climbing trips are. So, I’m thankful that Lauren was willing to still write, and she sent the following story and pictures.

Here is the first in what I hope will be a series of international adventure stories from my guest-posting, world-traveling friends… at least until I get my own passport again, sometime soon!

About Lauren Yant
Lauren is an outdoorswoman and marketing professional based in Salt Lake City. She’s also the style, brains, and everything else behind Ruthie Pearl, her line of funky, fantastic reusable tote bags. For more information about Lauren, connect with her on Twitter or visit RuthiePearl.com.

Special! Lauren set up a coupon code for rockclimbergirl.com readers. If you use the coupon code theclimbergirl at checkout on RuthiePearl.com, you’ll save 20%. Thank you, Lauren!

Our “climbing” trip to France started on a lazy Sunday afternoon at the Blue Plate Diner in Salt Lake City. My boyfriend, Scott, had always wanted to climb at Fontainebleu. And me? I just wanted to go to Europe. I turned to Scott while enjoying my fry sauce (THE world’s best condiment, note), and I said, “Let’s do it. Let’s book our trip to France.” That afternoon, we started searching for flights and finally settled on two tickets at just under $700 each (not a bad deal at the time).

The next few weeks were spent anticipating and planning for our trip. We found an amazing deal on a “gite” in the small town of Trezan just minutes from the climbing areas of Fontainebleu. We were to land at Charles de Gaulle, rent a car, and drive there to stay and climb for one week. After that, it was on to Paris for a week of sightseeing, eating, more eating and enjoying cheap (but delicious) wine.

Upon landing in France, it was obvious that our plans would have to change. It was raining. Not a torrential downpour–but raining. And kind of non-stop. We drove into Paris to find wi-fi and check the local forecast. Rain. Rain for the next week. And then (of course), sunshine for our week in Paris. I was quite distraught–mostly because I knew that Scott had dreamed about this trip for years. We decided to make the most of the situation and drive our car to Luxembourg…after…yes, about 20 hours of travel. We stopped at multiple rest stops on the five-hour drive and took naps. I vaguely remember the drive and our arrival in the city.

For the next three nights, we stayed in various hotels in Luxembourg for around 100-160 euros/night. Not the cheapest, but it was the best we could do on such short notice. We walked all around Luxembourg (where Scott grew up), and we even visited two castles on the countryside. The food was divine, and the scenery was equally impressive. However, I wanted to be the typical American tourist and “rack up as many countries as I could” in one visit. With that, we were off to the oldest city in Germany, Trier (just an hour’s drive from Luxembourg).

We stayed in a nice but reasonable hotel run by Days Inn. I would have preferred something more quaint, but at the rate we were going with our spending, it was the best option. For two nights, we enjoyed waffles with nutella, ancient ruins, German accents and vending machine beer. In sum, Trier was probably my favorite city. 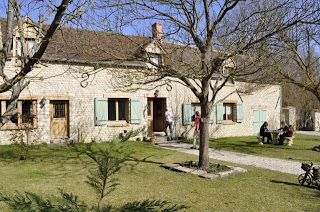 After a relaxing couple of nights in Trier, the clouds began to melt. We decided to drive back to France to spend a couple nights in our gite and check out the boulders at Fontainebleu. The gite, just 230 euros for a week, was super. My only complaint was the shower. It had no door or curtain, and the entire floor got soaked every time I used it. Bed linens were also not included in our rent…but these things seemed relatively common throughout Europe (especially the shower thing–they have really weird showers). 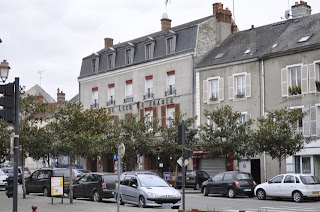 The nearest “town” to Trezan was Malesherbes–so we went there the next morning to get a couple of baguettes and pastries for our day on the rocks. One of our funniest memories was the owner of the local grocery who was so proud of his “English.” Every time we would walk out of the store, he would say, “Hello!” in the same tone you would tell someone “goodbye.” He seemed so proud of his ability to speak to us that we never corrected him. We just waved, smiled, and filed it in the good memories bank. 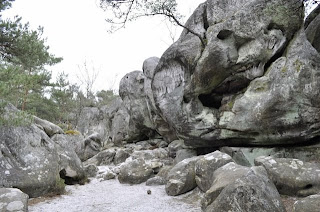 The first day of bouldering was mellow. We went to Buthiers, and everything is put up in kind of a “circuit”–you select your level of difficulty, start on #1, and go from there to climb around 30-40 boulders in one workout. I climbed mostly on the orange circuit–probably around V1-V3. Scott worked some harder things, but the moisture on the rocks and our lack of a crash pad made for a bad combination. It should also be noted that there is a large amount of quartzite on these rocks–not a good combo with small footholds and wet shoes. (Think Horsepens slopers mixed with Ibex glass and water = no bueno.) 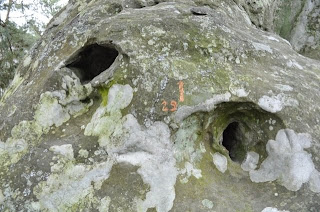 To elaborate on the lack of a crashpad: yes, there were places to rent pads near the climbing areas. Our decision not to get one was based 1) on the moisture present and not knowing whether we would even be able to climb and 2) our feeling that we should do as the French do…you know, just wipe off your feet and go. This was definitely bad judgment as Scott has about 60 pounds on me…and there’s no way I can even spot him. And even though the landings are generally good and sandy, there’s nothing like a day of jumping/falling down from 10 feet to make your feet excruciatingly sore for a week. 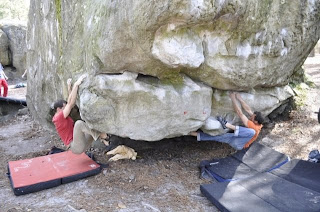 Anyway, the next day we went to a different, much better climbing area–Trois Pignons. When we set our eyes on this magical playland of boulders, we began to second-guess our decision to spend the next week in Paris. There were plenty of folks around willing to share their crashpads, and the whole scene was simply captivating. From babies to elderly men, everyone was climbing. I began to understand why Americans get so overweight–they don’t have places like this to go with their families, and where they do, they definitely don’t take advantage of it. It was on that day that I decided I wanted to move to the French countryside. And Scott, of course, was totally down with it…”as long as there’s bouldering nearby.” And bouldering nearby, there was. Everywhere. 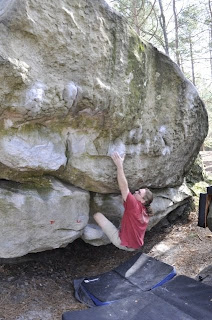 After a sun-filled day of climbing in the 65-degreesish weather, we packed our car and somewhat sadly headed to Paris. Our climbing wasn’t over yet, though…

About three days into our French sightseeing (the Louvre, the Notre Dame, the Seine, etc. etc. etc.), we were walking down a crowded street near the Bastille when a curious thing happened. “Salt Lake City! Salt Lake City!” I heard someone yell. I turned to see several familiar faces sitting at a cafe enjoying coffee and a couple smokes. It was some of our climber friends from The Front (an amazing bouldering gym in SLC). We chatted for a while and learned that they had another week or two of climbing and were staying near our original location in Melun. So a couple days later, Scott and I took a train there to get in another day of climbing. 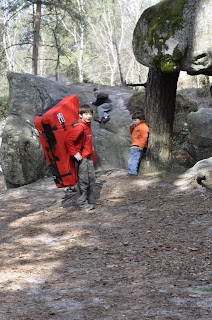 Our third and final day of climbing was somewhat windy and cold…but at the same time, I think it sort of made my trip. I almost finished a problem that I didn’t even consider to be within my range (maybe a V4-V5), and we met some wildly interesting people from around the world. Perhaps my favorite was the 70+-year-old guy in the biker shorts (with a hole in the crotch, no less) who was climbing harder than anyone else there. I also loved the large number of kids who could barely walk that were running around in climbing shoes. When these folks do it, they REALLY do it.

We drove back to Paris and finished our trip with some relaxing days visiting the Eiffel Tower, taking the train to Versailles, and climbing the 300 steps to the top of the Sacre Coeur. But the weird climbing coincidences weren’t over just yet…

On the train back to the airport to catch our departing flight, we overheard the people sitting next to us talking about their flight to SLC. They were clearly American (as they had their new scarves and berets in tow), and maybe even from Salt Lake. I thought it curious that of all the trains headed to Charles de Gaulle out of France, we would be on the same one. But then, when we got off the train, we saw two more of our friends from The Front. It turns out that we were sitting next to their parents the whole time, and almost their entire family was in the train car with us.

So…an amazing trip. Good bouldering, good food, good wine and good friends. And The Front? Turns out it bring a lot of people together. I guess it’s a climbing thing–it truly is a small world, isn’t it?

Bottom line: Fontainbleu. Highly recommended. Sort of a cross between Horsepens and Ibex with a French accent. The weather could have been better for us, but we’ll be back again–probably more than once.